The story behind the country’s famous stamps

With the significance of postal communication more relevant than ever, as well as the nostalgic longing for carefree days of travel, we’re delving into the stories behind Frestonia’s iconic set of postage and passport stamps.

Having declared itself a free and independent republic, Frestonia and its residents set about creating its own institutions and organisations including Ministers of State and a motto to live by – ‘nos sumas una familia’ - ‘we are all one family’. Richard Adams the Frestonian Garter at Arms, President of the College of Heralds was the designer of the stamp’s distinguished regal winged motif bearing their motto, and it went on to be used on outbound letters and parcels and travel visas for visitors to the nation-state.

The idea of the visa stamp was inspired by the Ealing Comedy film “Passport to Pimlico” which told the story of a similar self-created state in post-Second-World-War London.

This tongue in cheek reference served to generate press coverage for the bohemian scene and aimed to soften the general public’s negative presumptions of squatters, showing them as human individuals with humour, determination, creativity and resilience.

Tourists visiting the country could take a 5 minute tour to see the sights including the gardens with painted mountain landscapes on iron panels and its ‘river’ which took the form of a broken waterpipe – but the ultimate souvenir was a stamp in their passport proving they’d been to Frestonia and had unlimited entry. 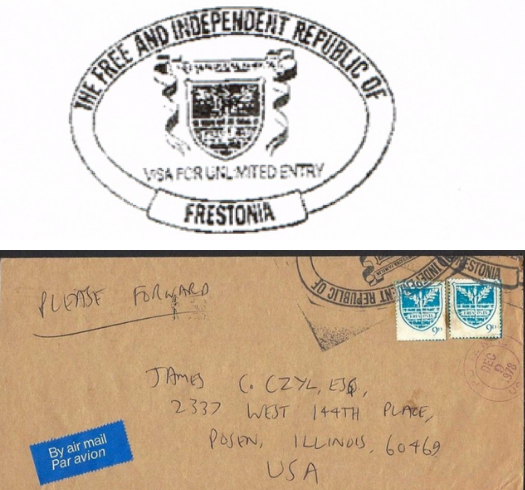 The postage stamps, although technically not official legal tender, were sent worldwide and largely delivered successfully thanks to their likeness to the Danish stamp design - responses were received from as far as New Zealand and the USA. Frestonia even sent an application to the International Postal Union, stating that they would deliver mail from anywhere in the world to its residents and expected the same courtesy from other nations; a smaller feat for a nation the size of mere acres than many thousands of miles, and further proof that Frestonians had a great sense of humour!

In practice, the Frestonia stamp would be marked once for UK locations (or what was known as ‘Near-abroad) and when sending further afield to the rest of the world (‘Far-Abroad), two stamps were required. The British post office seized a suitcase’s worth of mail that they had impounded and returned it to the citizens of Frestonia, but true to the spirit of the nation, the contents were duly posted straight back out and made it to their destinations on the second attempt.