The story behind the Freston Road mural

In 2020 Bolanle launched the Black Blossoms School of Art and Culture, an online learning platform decolonizing art education. Tajudeen’s work has received national and international press and she was recently a guest editor for the Dazed Magazine where she invited artists, curators and educators to imagine new ways of Black feminists' ways of seeing.

Azarra Amoy is passionate about bringing art to different audiences; and produces public art installations in the form of murals working for the architect firm Squires and Partners, Kensington and Chelsea Art Week, Notting Hill Carnival and Hammersmith to realise these ideas. She has received commissions from Adidias, Size and Big Creative Education. In all instances, Amoy has used personal stories, local histories and the built environmental landscape to inform the artwork design. Her striking visual narrative draws references from culture, community, hope and power.

As a Fine Artist, Amoy uses mixed media collages and paint to illustrates a creative diary of her life, she has had her work exhibited at the V&A as part of the gal-dem takeover, Black Blossoms - Highlighting Black Women exhibition and her work is currently on permanent display at the Youtube space in Kings Cross, London. Amoy’s work has received positive and critical acclaim being featured in notable press such as BBC, Buzzfeed, It’s Nice That and Timeout to name a few.

Linett Kamala is an interdisciplinary artist with a passion for enriching the lives of others through art, well-being and education as demonstrated through her collaborations on creative projects with numerous organisations spanning over 30 years. Kamala refers to her mainly monochrome expressive text based art pieces as ‘freestyle calligraffiti’, drawing inspiration from calligraphy, Carnival culture, graffiti, music and abstract expressionism.

Her personal educational journey links with the life stories of others to form the basis for much of her work. Kamala is Director of Lin Kam Art, a company which seeks to enrich lives through art and education via happenings, experiences and programmes.

She is Board Director for the Notting Hill Carnival, President of University of the Arts London Alumni of Colour Association and Member of Somerset House Exchange. 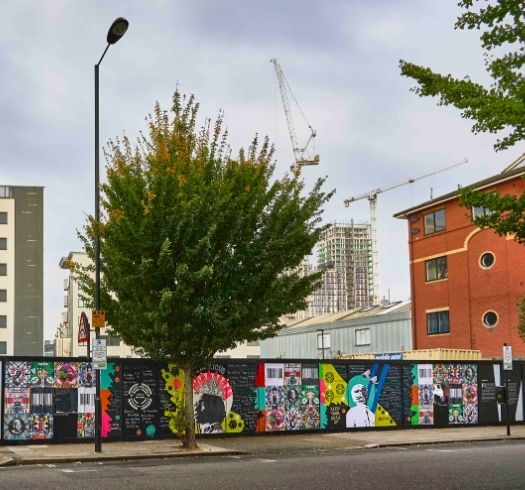 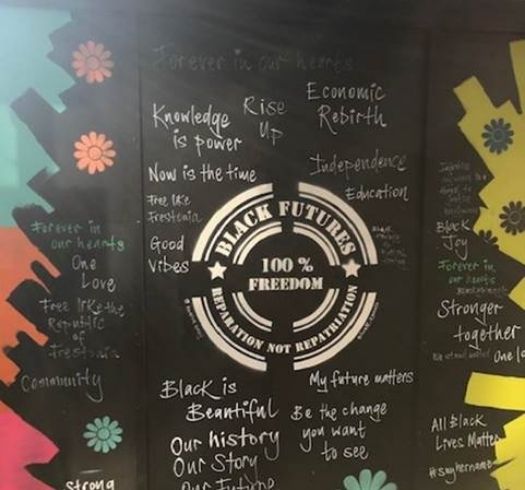 ND: The mural on Freston Road is a powerful piece of art that uses the legacy of Frestonia to highlight struggles that face the Black community today. How did you first become familiar with Frestonia and what part of it inspired the concept?

Bolanle Tajudeen: The Mural was commissioned by Kensington and Chelsea Art Week and in the brief they mentioned Frestonia. After doing more research I was amazed by how a group of squatters came together to create a community that loved each other like a family and wanted to resist the government's attempt in destabilising their community. In creating the state, Frestonians used visual symbols such as visas, postal stamps and a centred sunflower on a green flag which were all designed to give the inhabitants and visitors signifiers of the new territory. What the Frestonians did was create a safe state for themselves and this is what inspired the Mural.

The artists and I wanted to explore what a safe state would be like for Black women, children, men, non-binary black people, trans Black people, disabled Black people. On a few of the mural panels you can see a Black Lives Matter Visa stamp which states “Reparations not Repatriations”.

Azarra Amoy: The mural has different elements throughout that have been inspired by Frestonia. The stamps draw inspiration from Frestonia stamps but for the Mural we have featured people who are doing important work for the community or those whose story has had an impact and created change. On the Mural, we also included mirrors so that individuals can become a part of the artwork and also encourage them to become the change they wish to see. Then we have the Calli style writing that features quotes and positive messages, and figurative elements that bring awareness of the struggle the youth are under as well uplifting quotes.

ND: The Mural is wonderfully vibrant and eye-catching, drawing passers-by to pay attention and pass on a strong and poignant message - can you tell us a little more about the creation process ?

Azarra Amoy: Linett and I both created three designs that were put up for public vote. Each design had a message that represented the history of London and the Black community for example, the Windrush Generation.  The ‘We Are One Family #BLM’ design won by a landslide. This also makes the message even more powerful because it was chosen by the community, about the community.

ND: How important is the support of local businesses in getting your message out there and creating real change?

Linett Kamala: On the mural we actually included Black squares to highlight the Black squares which  were posted by individuals and businesses all over Instagram this summer when it was Blackout Tuesday, a campaign that highlighted the many injustices faced by the Black community. It is very important that businesses make sustained and continuous efforts in supporting the Black community in the fight for equality. Financial support from the W11 campus was great and the support we have also received from the Bramley studios has been amazing. However, for real and lasting change to happen it cannot be one off support it has to be continuous as inequality is systemic. 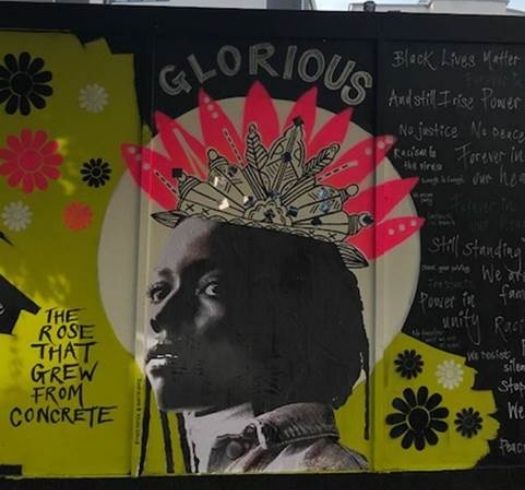 ND: Do you have a favourite section or quote from the wall?

Linett Kamala: Whist working on the mural, I asked locals who were walking past if they had a quote they would like to see on the wall. A 10 year old told me: “My generation believes in equality” - I wrote the words on the wall in her presence shortly after she said it.

Bolanle Tajudeen: One of the quotes on the mural that means a lot to me is “Economic Rebirth” - it is painful to admit that many of the problems in the Black community can be directly linked to the lack of financial investment that is made in services that would directly benefit us.

ND: If you could create your own fantasy Frestonia, what would it look like?

Linett Kamala: Community would be at the heart. There would be a true sense of looking out for each other, beyond people’s own children and immediate blood relatives which tends to be the case. An acknowledgment that we are all connected and have collective responsibility to create space where all can thrive, without it being at the expense of others.

Additionally, as a direct descendant from slaves it hurts to know that no financial recognition was given to those who enslaved, and yet, instead those who owned slaves and their descendants were compensated – it’s completely immoral, yet no serious steps have been taken to rectify this.

Also, there is little research into generational trauma - instead, people are told it was in the past and to simply move on. Why is this horrendous chapter in human history taught in schools without any acknowledgement of the long-term psychological damage, let alone other aspects. I am hopeful for the future as so much growth has taken place this year for so many.

Bolanle Tajudeen: I agree with Linett, a few weeks ago Parliament’s human right committee admitted that Black people are not equally protected. The statistics devastated me and shook me to my core - my own fantasy Frestonia would be a society that not only stood against racism but delivered actionable changes to better the lives of those affected by it.

ND: Where can people find out more about your work?