For this month’s ‘Spotlight on Art’ we are venturing to Breaker’s Place to commemorate the renowned sculptor, Phillip King. 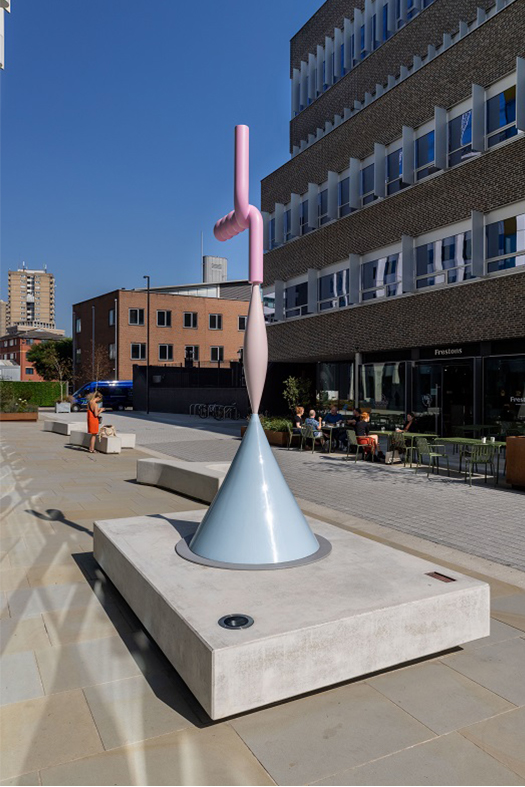 In August 2021, Phillip King’s ‘Tra La La’ sculpture joined the Notting Dale campus. The piece proved to be a perfect addition to the area, with its light form and pastel colours generating a summer-feel enjoyed by occupiers from across the courtyard at Frestons cafe. Originally created in 1963, this piece was reconfigured and up scaled for this outdoor display.

Tra La La is not only placed at the heart of the campus but has proven to mimic the importance of one too. It has generated huge amounts of calm and joy in equal measure for those visiting Notting Dale.

Phillip King was born in Tunisia in 1934 and moved to England ten years later. Having joined Cambridge University to study languages, he began to sculpture during his time there. From there, he went on to study sculpture at St Martin’s School of Art where he was taught by the famed Anthony Caro. Soon King established a major reputation both in Britain and overseas through his use of multiple materials, from fibreglass to metal, through to wood and slate. King was frequently referred to as an integral member of the British art scene’s New Generation during the 1960s whilst proving that art and sculpture-making should know no rules or limitations.

With Phillip King’s sad passing last month, we hold the Tra La La sculpture with even greater importance and urge everyone to admire this fine piece of art at Breaker’s Place.