Spectacular sculptures on a cosmological scale

Born in Mexico City in 1967 and initially starting out as a political cartoonist, Ortega received no formal art education. Instead, he took early inspiration from experimental art courses organised by Gabriel Orozco in the late 1980s and early 1990s, using his background in politics to create work with a sharp eye for social and economic observations.

Over the course of his career, Ortega’s work has been shown at the Tate Modern in London, MoCA in Los Angeles, Venice Biennale, and the Centre Pompidou in Paris – amongst many others. 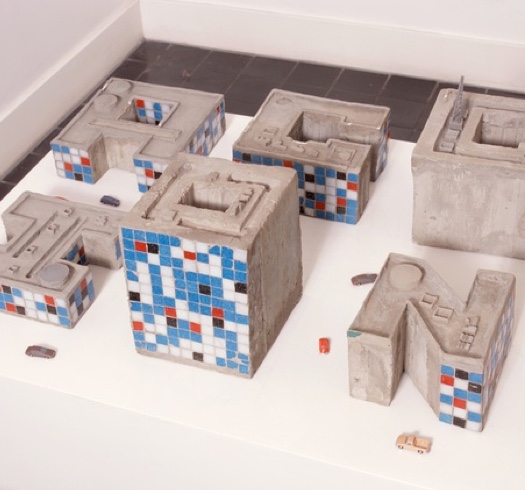 Stylistically, Ortega’s sculptures use objects found from everyday life as their starting point – with past work including Volkswagen Beetles, posters, hammers,oil drums, and even tortillas. Focusing on the relationships between these objects, Ortega disassembles and recombines them into new and intriguing installations – often suspending them from ceilings to suggest disintegration – and encourages us to rethink our connections to the world around us. These works often have a strong sense of humour and wit to them, creating complex systems that expand everyday items to a greater, almost mythical, level.

We’re delighted for Damian Ortega’s Accion sculpture (2000) to be on display at Notting Dale for occupiers to view. Meaning and spelling out ‘action’, the work uses cement, ceramic tiles and toy cars to create a miniature, Modernist estate.