To kickstart the new year, January’s ‘Spotlight on Art’ celebrates the unique and instantly recognisable workings of the iconic Rose Wylie. Wylie is a British artist, born in Hythe, Kent, in October 1934. Initially studying at Folkestone and Dover School of Art, Wylie then graduated from the Royal College of Art with an MA in 1981.

Much like her artistic creations, Wylie’s career has seen an array of colourful highlights, including representing Great Britain in the National Museum of Women in the Arts ‘Women To Watch’ (2010), receiving the Paul Hamlyn Award (2011) and OBE in the Queen’s Birthday Honours List (2018). Alongside this, Wylie has held a number of exhibitions, including the BP Spotlight exhibition at Tate Britain (2013), which led to museum shows worldwide.

Primarily Wylie’s work centres around painting and drawing on un-primed canvas. Through her use of bold and exuberant compositions, sophisticated transmutations are produced to elicit a range of emotional responses for those observing. 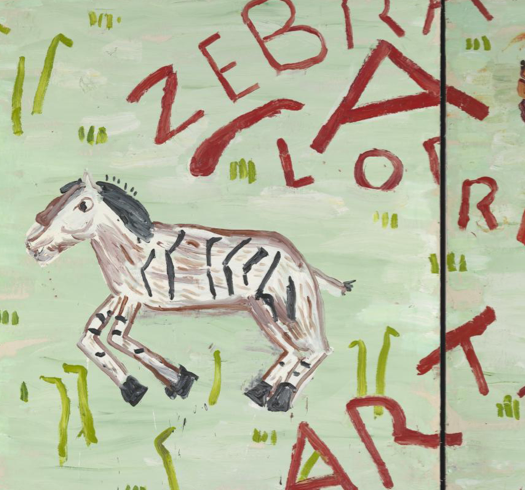 All of these paintings take inspiration from a wide range of visual aids, including Egyptian Hajj wall paintings, celebrity gossip and personalities (including John Terry and Marilyn Monroe) and everyday events.

Rose Wylie’s ‘Palm Tree and Camel (Queen of Sheba)’ (2012) oil painting can be seen hanging in The Yellow Building’s atrium. We strongly urge everyone to visit this unique piece of art that captures the surreal, dream-like nature to Rose Wylie’s paintings.