In April, we’re celebrating the stunning work of Alighiero Boetti, the Italian conceptual artist best known for his embroidered tapestries and countercultural ethos.

A member of Italy’s Arte Povera movement – which rejected the establishment in favour of accessible materials and simple, dynamic messages – Boetti was born in Turin in 1940, spending his early years studying diverse topics including philosophy and alchemy before travelling to Afghanistan in the 1970s. There, he first discovered the traditional embroidery that would define his most iconic works, working collaboratively with local weavers.

After finding success at home with exhibitions in Milan and Turin, Boetti’s first solo show in the US took place at New York’s John Weber Gallery in 1973.

He continued to exhibit in the US and Italy until his death in 1994 aged just 53. 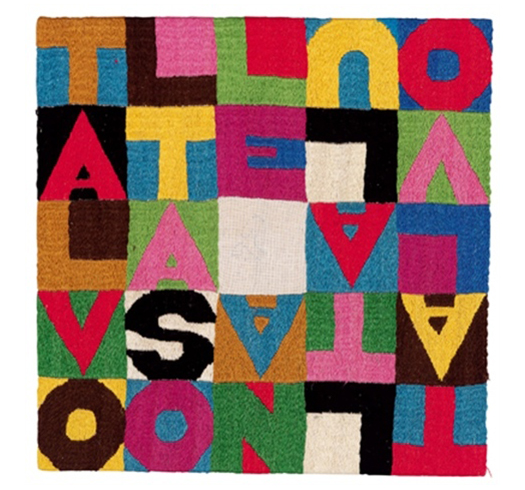 The embroidery that Boetti is most well-known for is his series of more than 150 different tapestries depicting maps of the world (known as Mappa). Using bright unexpected colours and filling the borders of each nation with a depiction of its flag, the resultant works explore ideas of patriotism and global boundaries.

One of the most distinctive elements of these maps is their bold, gridded borders, which feature sayings and phrases in both Italian and Persian that add context or subvert meaning. Boetti’s maps were created over more than 20 years, tracking geopolitical change and shifting borders, while also evolving collaboratively as he allowed the weavers he worked with to make more choices in regards to colour and style.

Mappa del Mundo from 1988 is a prime example of one of these embroidered tapestries, and we’re very proud to be able to display it in The Yellow Building’s atrium this month for everybody to see and enjoy.