This week we’re exploring the story behind another of The Yellow Building’s most striking and attention-grabbing atrium artworks. The 2 Ton Hyundai Truck by Korean artist Kimsooja currently parked and overlooking Nicholas Road is undoubtedly one of the first signs for passers-by that this is a campus like no other.

The truck’s bed is loaded with a mound of colourful Bottari (cloth bundles sewn by Kimsooja herself) bound together to form an interactive piece of performance art. The truck was driven through Korean cities from November 4 to 14, 1997 with Kimsooja sitting atop the bundles capturing the journey on film to create a reflection on the role of women in society, and voluntary or involuntary migration and movement.

The film has been shown around the world and even projected onto a Seoul building – she has since recreated this in cities such as Paris proving its global contemporary relevance by evoking both a nostalgic feeling for the past whilst projecting hope for the future and new beginnings. The truck may have found its resting positioning at Notting Dale but the stories it has told and the roads it has travelled will forever give it meaning in a changing world. 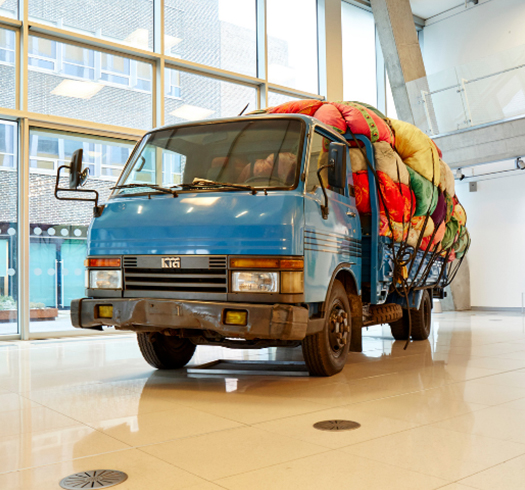